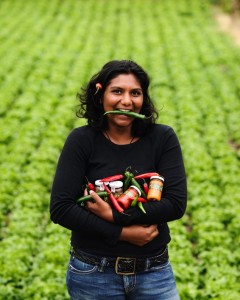 In 2004 I cycled with my bag full of groceries for my sambal through the city of Rotterdam. I cycled past a poster with RotterdamKOOKT (Rotterdam COOKS) in the Kunsthallen, a fair for small-scale fairly, sustainable produced food. When I got home, I started with my sambal, as always I had several home-made jars for family and friends. While making my sambal, which does not contain sugar or other chemical additives, I thought to myself "I am a small producer" and contacted the RotterdamKOOKT organization.

I was lucky, it turned out that there was one dropout, so there was a spot available for 2 days. I just had to make my sambals and present them, the sambals could not be put in the jam - and apple sauce pots that I had, used for friends and family. Therefore the first jars to be filled came from Xenos. I had typed the name Hottie Sambal before I could think of it and the logo came in my favorite color olive green. The first day was overwhelmingly busy, I never expected that. The idea of my participation was to let people try how sambal tastes if there are no chemical preserves or a lot of salt in it. That same night I was back in the kitchen making sambal for the next day. I was at the fair for 2 days, sold all my jars and went home with new orders.

This was September 2004. October 2004 I was at the Chamber of Commerce and Hottie Sambal was official. The first year I went from my own kitchen to a friend's restaurant kitchen. In 2006 I moved into my own shop and production space and in 2009 I went to a small factory. The sambals are currently sold in various organic shops.

What I am very proud of is that I still work with the same suppliers as 15 years ago and even though I now produce more, the taste and ingredients have not changed. The ingredients come from small organically growing farmers. Especially from the Netherlands, but also from care farms from southern Italy, for example. In this way I am not only organic, but also sustainable.

Nice to meet you, Sita Danser, maker and creator of the Hottie Sambals.